Our teaching methodology is ideal for building practical Spanish conversational skills at a fast pace.

SpanishBlackbelt provides its Spanish language instruction over Zoom in accordance to accelerated language learning principles through: 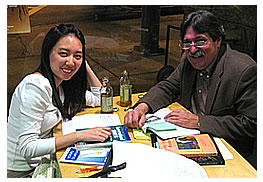 By delivering personalized Spanish courses that have been designed in house to attract the interest of students with different backgrounds using a variety of multi-sensory materials and activities to adapt to students' learning styles in accordance to the theory of multiple intelligences.

By replicating a total language immersion experience through the use of proprietary learning material and role plays, and by having structured guided conversations almost entirely in Spanish softened up with the aid of body language, dramatization, and visual aids, while increasing speed and sofistication of the language gradualy as the students travels through the different class levels of Spanish fluency offered over Zoom.

By keeping things simple and systematically introducing chunks of vocabulary, patterns and structures while focusing on what is practical or strictly needed, pointing out similarities and differences between both languages, and relying on exemplification, repetition, roleplaying, and mnemonic techniques to aid with memorization.

By using positive reinforcement and enabling a lively, fun, and relaxing atmosphere to increase confidence, facilitate assimilation, and motivate students to continue learning.

By providig one-on-one classes and by keeping our group classes small to increase students' "air-time" in class.

Exposing students to the cultural, social, political and economic aspects of Latin-American countries and the Hispanic community in general by matching them with a professionally-trained native Spanish speaking tutor.

Spanish immersion is a method of learning by which you learn Spanish using only Spanish and little to none of your native language. ​You essentially surround yourself with Spanish (Spanish speaking people, Spanish movies & music, Spanish books, etc) and force yourself to communicate and interact with your environment only in Spanish.

According to the definition of the Real Academia Española, the most prestigious dictionary of the Spanish language, immersion is the action of introducing oneself into a real or imaginary context, particularly while learning a foreign language.

Although it was normally associated with the idea of studying while living abroad in a country where Spanish is spoken as a native language, nowadays with the advances in technology it is quite possible to experience many of the immersion benefits without the need to travel abroad. Although you will probably have to use your native language while at work and while talking to friends and family, while doing immersion at home you can push yourself to live the rest of your life in Spanish. If you have access to the internet you also have access to Spanish media, movies, music, and literature, which you can start enjoying at your own pace.

Spanish immersion works because you physically put yourself in situations where you have no choice but to speak the language. At the beginning you may be uncomfortable and confused because you will not know enough vocabulary and grammar rules to decipher the language. But you’ll also be forced to grow and to rise to the challenge as your instinct to survive kicks in. The idea is that, without your native language to fall back on, speaking in Spanish will become a real necessity. It will be a sink-or-swim kind of thing.

One of the key elements of learning Spanish through immersion the right way is having frequent, diverse and broad opportunities to hear, read, write and talk in Spanish. Students who learn Spanish abroad normally have incredible success in learning it precisely because of how frequent, diverse and broad these opportunities are. These students are exposed to the Spanish language everywhere they go which seems to sink in effortlessly.

Despite being a great strategy, Spanish immersion will not work, whether done at home or abroad, when it is executed poorly. It will only work as intended if you do not make the mistakes that people often make.

Some of the mistakes that students make when immersing themselves in Spanish (and which you should seek to avoid) include:

Yes. All of our teaching material has been developed by our Academics Department and is accessible online by our students and Spanish tutors.

This material includes a syllabus that will cover topics related to the emphasis you showed interest on, Spanish grammar guides, role plays, conversations, multimedia material and much more.

We do not use text books or grammar books. Grammar books are normally not good tools to learn a language. Most of them are too long, impractical and confusing. They can sometimes be used, though, as reference to clarify ideas.

Our online student center, in contrast, is much better simply because it covers what you need to use in most conversations in very simple terms.

Teaching material is accessible by our current students at no extra charge through our site. On there students will be able to access all material to be used in class and additional resources to complement your face-to-face instruction with some self-studying at home.

Students will be able to generate printouts of this material 24x7.

Unfortunately not. To safeguard our intellectual property, only our current students have access to our proprietary teaching material. Just like all of them, you will have access to it at no extra cost once you enroll for any of our courses.

If after you are given access to this material you believe that it will not add the value that you were expecting, you will be entitled to requesting a full refund provided that you notify our office of this request by email within the following 48 hours after you had your first session. You may also request to be transferred to a higher or lower level if needed.

In order to provide you with some detail, though, material for each of the 9 levels of our course for Everyday Conversation for example includes 16 chapters, each with a specific vocabulary set and grammar structure with which you will be working on with the help of your tutor.

Main objectives for each of our levels can be found here.

Most of our Spanish classes focus on developing your conversational skills without losing attention to reading, writing, grammar and vocabulary acquisition. Some private classes may instead focus on any of these other skills as per the request of the student.

Our Spanish classes are very practical and conducted almost entirely in Spanish using a speech that gently increases in complexity, speed and sophistication so that you can get the feeling that you are understanding almost everything that the tutor is saying. You will learn to speak in Spanish in a context that considers your unique needs, interests and prior knowledge simply because we know students will learn faster when they are paying attention to something they care about.

Our Spanish classes focus mainly on developing your speaking and listening skills because this is precisely what interests most of our students. Having said so, attention is also given to develop all other skills of the language such as reading, writing, grammar and vocabulary acquisition. Of course we could also focus exclusively on any specific skills if that is what you are looking for.

You will be using Spanish in engaging exercises and activities that will prepare you to communicate with confidence in any situation. When a weakness or problem area is identified, your native Spanish speaking tutor will take the time to explain the theory you need to know to overcome that weakness.

Most of our Spanish students are mostly interested in improving their speaking abilities. We strongly believe that this objective is not achieved in short time by paying too much attention to grammar. It is indeed grammar what makes most people lose confidence while speaking.

The idea is that there is only a limited amount of time to be exposed to the language. Studying grammar would distract you from your ultimate objective.

Our method is deductive. You practice in class using the target language in role plays, dialogues, conversations and presentations that address your topics of interest... and then stop to review the grammar/areas that your tutor identified as areas of opportunity for improvement. Grammar, therefore, is analyzed only when specific mistakes are made. That way you learn it within a context so that you can recall what you learn easier.